The Municipality of Milan was awarded in 2019 an important European project on raising awareness of young people on the issues of climate and food. This was possible thanks to the synergies between the Food Policy, the European Affairs Office and some other Italian organisations. The city of Milan will lead the project which entails a diverse range of actions at local and international level, realized in collaboration with almost 30 European partners.  In particular, Mani Tese, Acra Foundation and Action Aid have worked together with the Municipality over the past 2 years to define the actions that should have been included within Food Wave – Empowering Urban Youth for Climate Action project.

The project is part of the program of the European Commission DEAR – Development Education and Awareness Raising, which aims to support and involve European public opinion on social, economic and environmental issues at a global level. DEAR projects work with civil society organisations and local administrations to promote universal values ​​of freedom, democracy and respect for legality.

The initiative promoted by the Municipality of Milan has been recognised as one of the two winners of the call launched in July 2018, by the European Commission (Ref. EuropeAid/160048/C/ACT/MULTI). The call lies under the Development Education and Awareness Raising (DEAR) programme and aims at financing actions to raise awareness of European public opinion and educate development towards third countries, under the guidance of Non-State Actors (NSA) and Local Authorities (LA)

Food and climate: the invisible thread that tie them together

The 4-year project envisages the development of an articulated campaign to raise awareness and involve public opinion – particularly young people – on key climate change issues, and the role of urban food policies in tackling them. Eating habits and food systems at local and global level have in fact a significant impact on climate change. If food wastage were a country, it would be the third largest emitting country in the world! 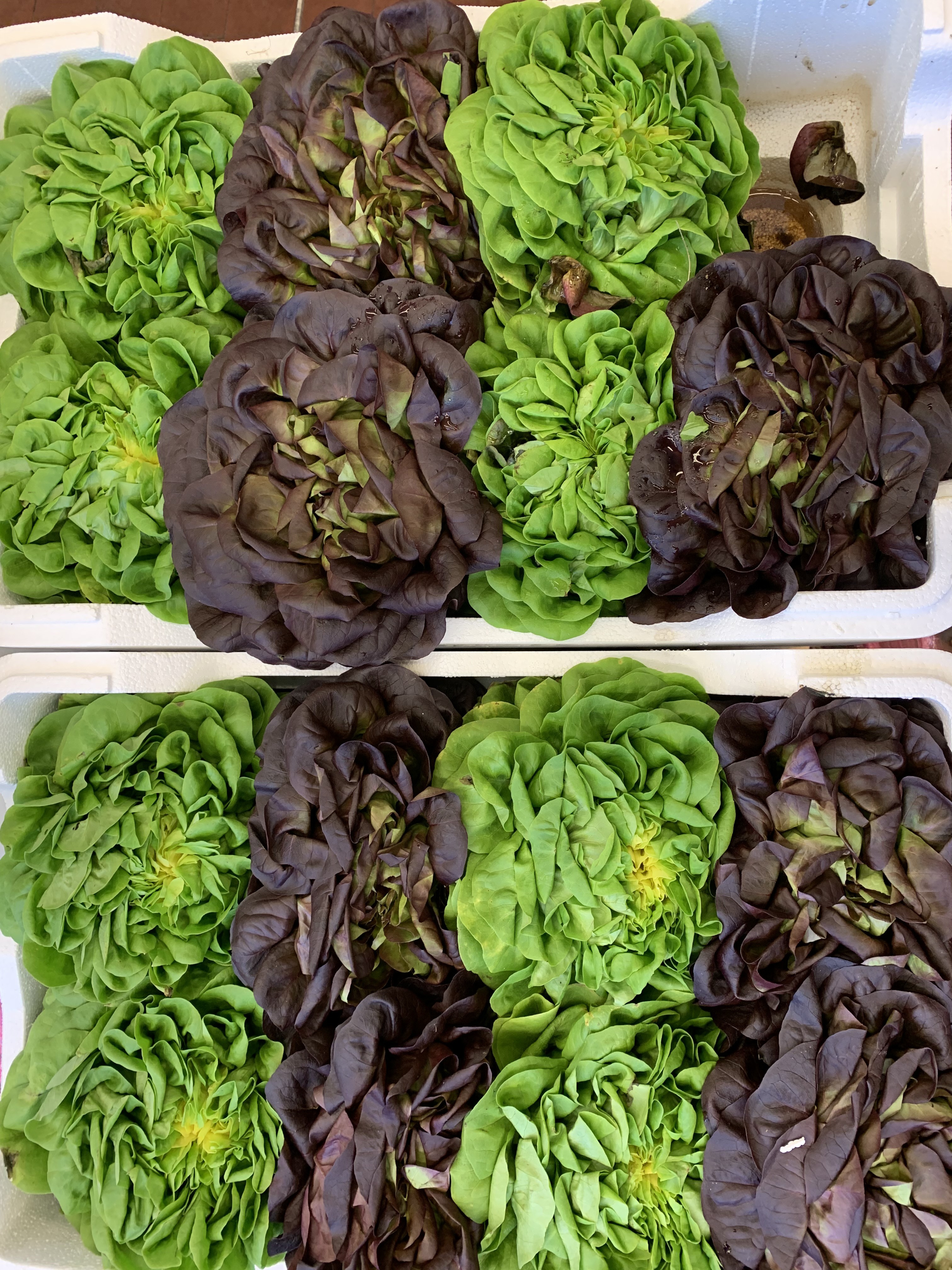 On the other hand, global warming, and in general the underway anthropocentric changes of all the bio-geo-chemical processes (i.e., water, nitrogen, phosphorus, carbon cycles), threaten food systems, endangering not only their efficiency but even the livelihoods of populations.
The food and climate nexus is therefore the main focus of the European project, also in consideration of the fact that nutrition and eating habits are key elements that affects all communities, every day, and on which it is possible to act through both public food policies and structural changes in the economic system.

Another fundamental characteristic of the project is the target population: young Europeans. The actions in fact focus on young people (15-35 years old) as they are considered the future and the most important driver for change, as witnessed in the last months by the global movements animated by concern for the climate and sustainability issues. Young people (15-29 years) represent today 17.2% of the European population, a percentage that is expected to grow. The project will cover some 87% of them (Eurostat, 2016).
The project aims to address the food-climate link in an integrated manner, with reference to the issues of social inclusion and integration of vulnerable groups of the population (for instance, inhabitants of peripheral and migrant neighbourhoods). These values ​​are in fact the pillars of the project which also has among its objectives the reinforcement of an European citizenship spirit. 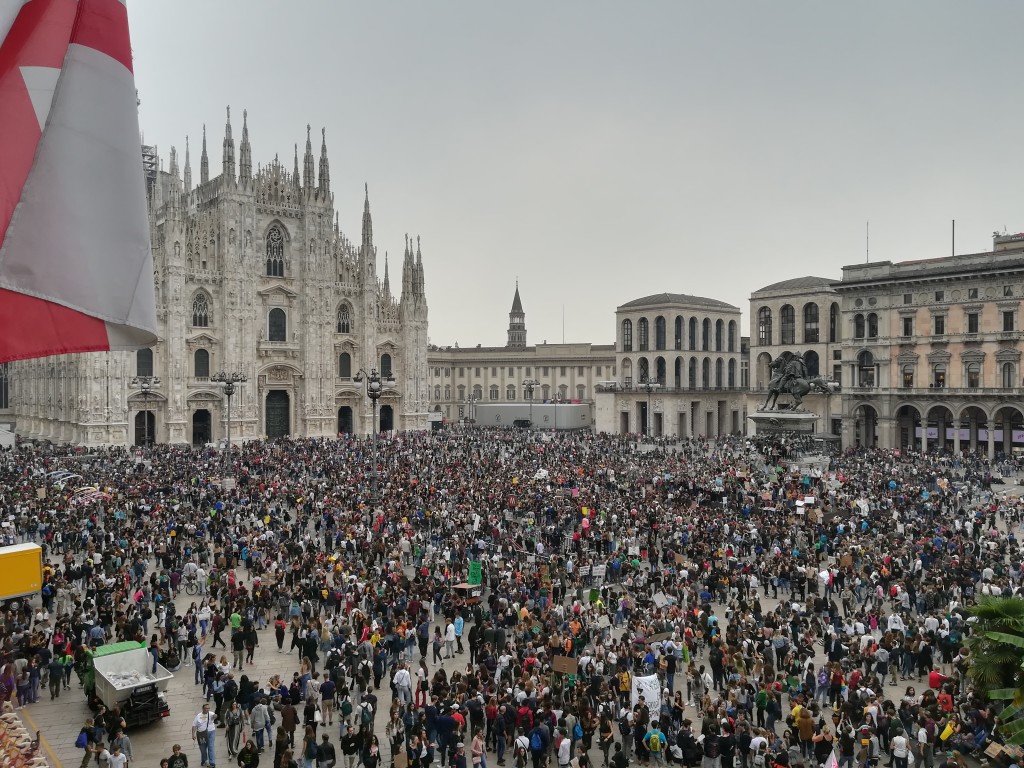 Actions of the project and methodologies

The structure of the project has been designed according to the so-called Theory of change which foresees 3 interconnected pillars, 13 actions each.

“Awareness” , coordinated by Mani Tese , is aimed at an extensive information and training program (formal and non-formal) dedicated to young people. In this context, scientific studies for the development of the educational materials and a survey at European level on the awareness of young people on the food-climate nexus will also be developed.

“Engagement” , coordinated by ACRA Foundation, aims to actively involve a more limited number of interested young people through winter or summer schools, workshops especially dedicated to the groups of youth population residing in peripheral neighborhoods, support of youth organisations and exchanges of young people between countries of the Global North and Global South. All these activities envisage making young people protagonists by increasing their knowledge and engagement, contributing to the construction of the pan-European awareness campaign – which is the third pillar.

“Outreach”, coordinated by Action Aid Italia,  will address all European citizens through an online and offline platform with the creation of networks of food influencers and micro-influencers, street-action spread over the territories, events dedicated to youth participation, a film festival and visual art competitions for young activists. Among the numerous events that will affect the city of Milan, the Municipality together with the Global Shapers youth network will organise a large meeting on food and climate in the coming months to involve young Europeans on the topic and bring an informed and participatory contribution during the Youth Cop. 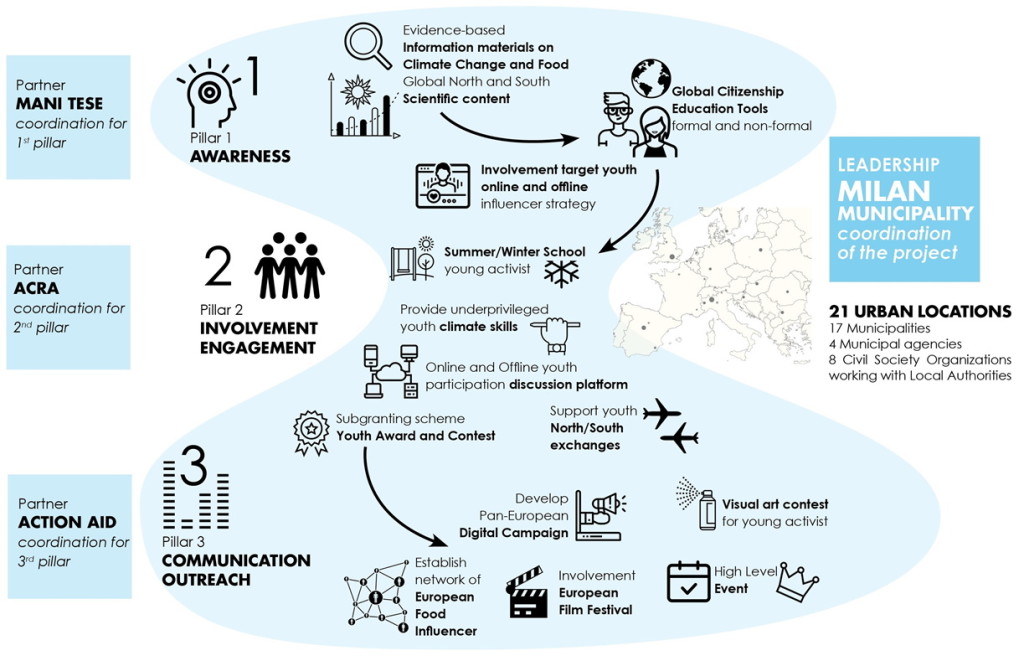 Results to be achieved