The Municipality of Milan has put in place some specific food aid actions to provide assistance to the elderly and vulnerable people. With the lockdown in force, non-profit associations active in the distribution of food aid . Many volunteers are in fact over-65s or belong to the categories at risk of infection.

The Municipality of Milan through the synergies between the Social Affairs Department, Food Policy and Civic Defence, the public companies Milano Ristorazione and AMAT, Sogemi, Banco Alimentare della Lombardia, Caritas Ambrosiana, Cariplo Foundation, Programma QuBì, and IBVA have developed the “Dispositivo  aiuto alimentare – Food Aid System” which aims at compensating for the closures of associations and charities active in Milan by centralizing the entire supply chain. The System is responsible for the distribution of weekly food aid until the end of the Covid-19 emergency. To avoid infection, a safety protocol based on the sanitation of the infrastructure used and the use of PPE for all the operators involved has been developed.

10 temporary hubs in the city

As part of the actions put in place by the System, 10 temporary hubs were installed and dedicated to the preparation of food aid packages intended to the elderly and fragile people have been opened. Recipients have been identified by the Milan’s Social Services, and non-profit operators. 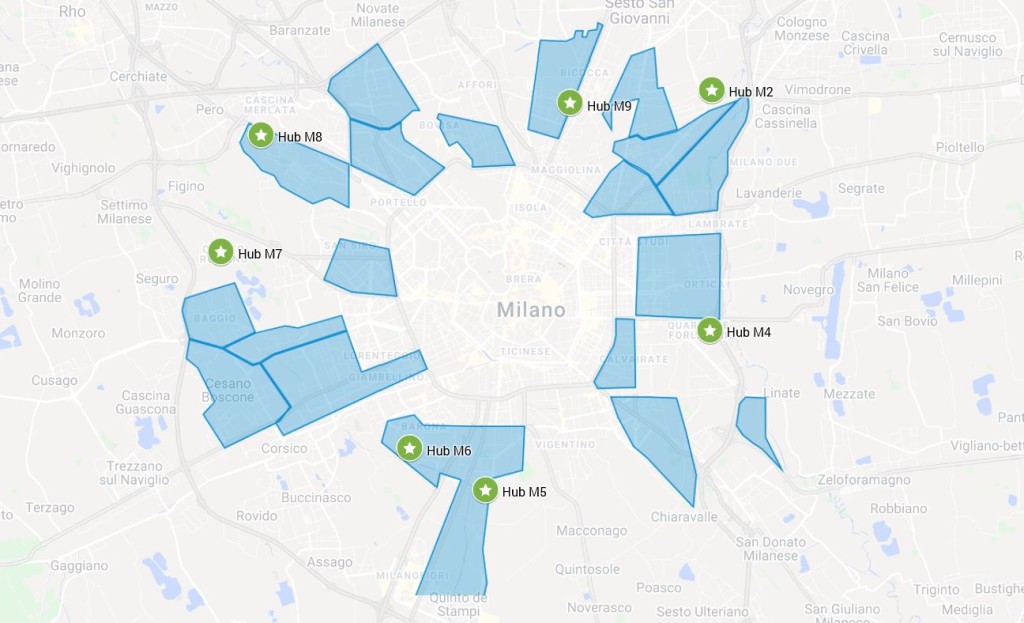 The service provides that the foodstuffs stored at the logistics center of the Banco Alimentare della Lombardia in Muggiò  and at the Italian Red Cross – logistic center in Segrate, are redistributed during the week to the 10 local hubs in Milan, where the staff – composed by employees of the Municipality and volunteers of the associations – prepares food aid for selected people and families.

More than 185 people have been involved in the project, including city employees, operators, volunteers and staff of transport companies for deliveries. 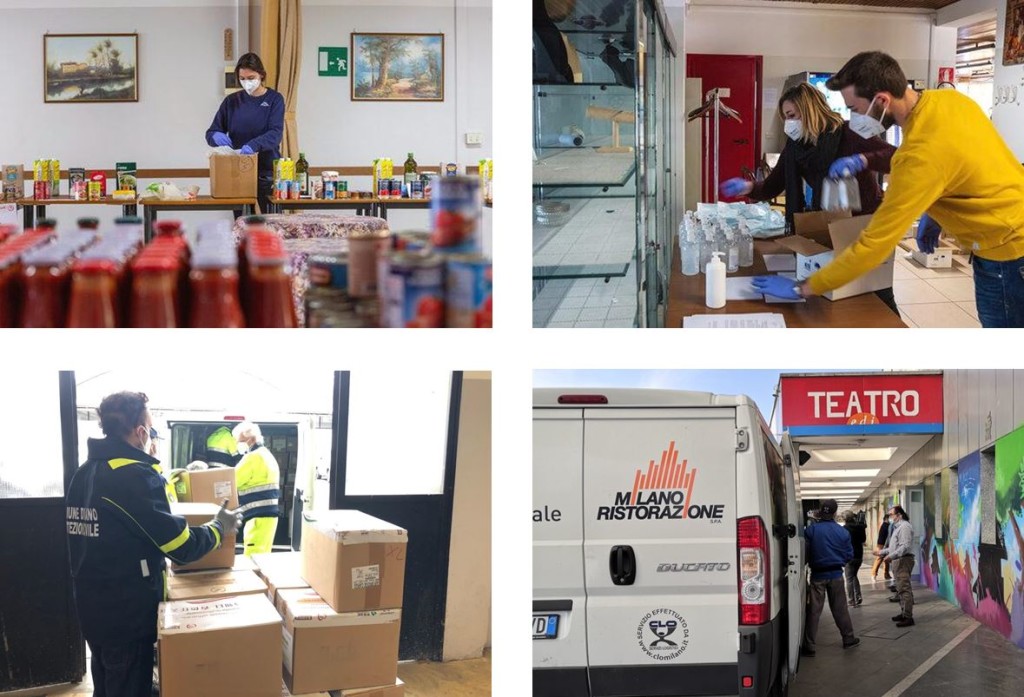 As part of the system, the Municipality with the help of Sogemi – Ortomercato Milano – opened a specific hub for fresh produce. There, fruits and vegetables donated by retailers and wholesalers of AGO, ACMO and the producers consortium were collected, rearranged and redistributed to the food hubs, where they were added to the food aid packages.

This action allowed to improve the overall quality of the food aids.

Fondazione di Comunità Milano, together with the Municipality of Milan and some partners of the action, has opened a crowdfunding action in order to support the activities of the hub and the purchase of food that will be donated. 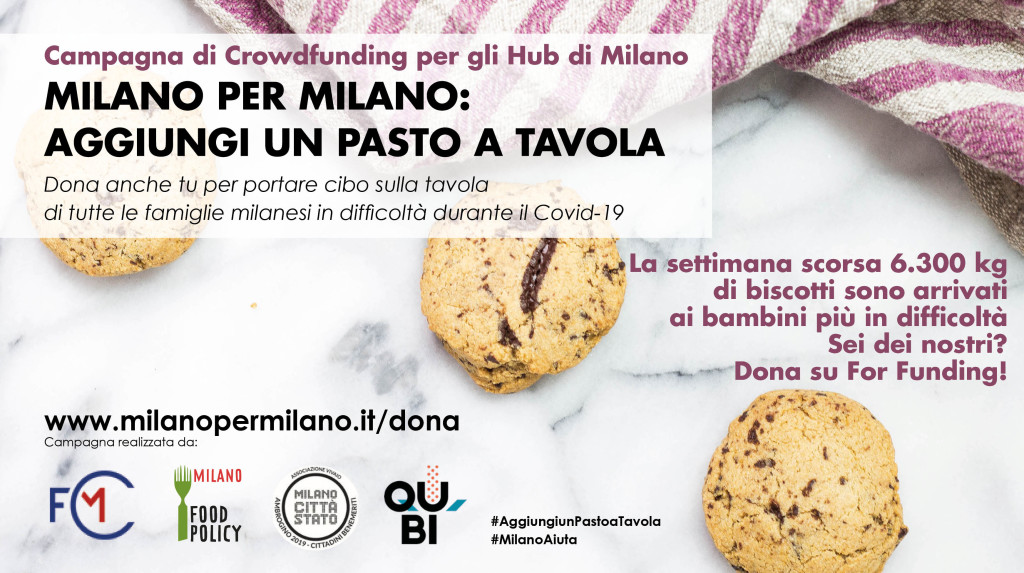 All operations of the “Food Aid System” have been developed while maintaining the highest level of safety for the operators and beneficiaries.

The staff training took place outdoors at the Palazzo Marino’s courtyard maintaining distances between participants of more than 1.5 meters and operating a timed entry system. 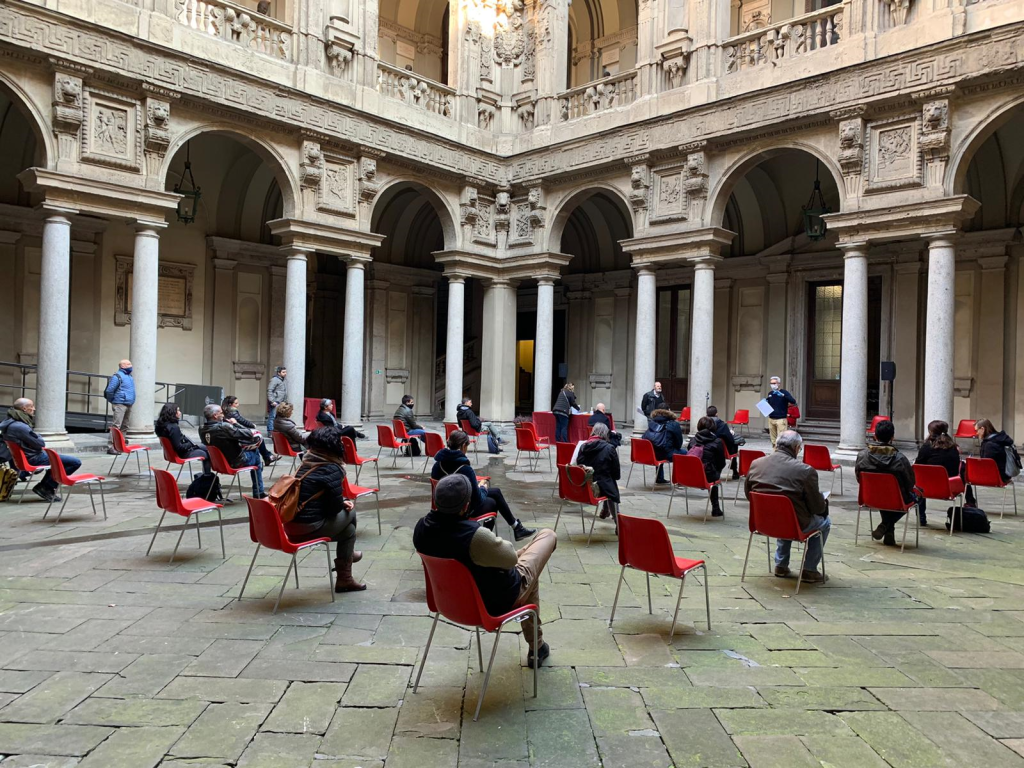 All staff were equipped with individual PPE, namely FFP2 masks and disposable gloves.

Each hub was equipped with sanitizing gel and infrared thermometer to monitor the temperature of the staff.

Security protocol: Shared rules for contrasting and containing the spread of the Covid-19 virus in the context of the Food Aid System

Communication for suppliers of the Food Aid System

The Hubs represented also a light infrastructure for the distribution of other materials. In the second week, a kit of FFP2 equivalent masks and sanitizing gel was distributed for general practitioners and paediatricians operating in Milan.